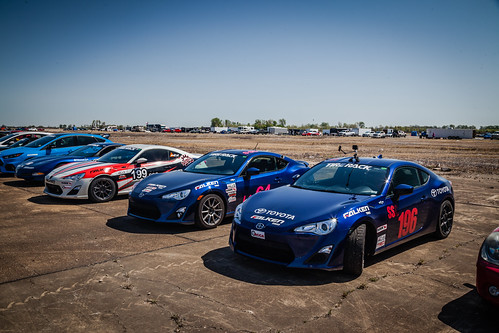 In short, WOW. What an amazing weekend.

I went into the weekend hopeful that I would drive the car well, and that I would be able to prove to myself that I can hang with the big dogs. I’ve been autocrossing for a long time (with a few gaps in between) and while I’ve had some spurts of random success outside of St. Louis, I have never felt confident that I could do it repeatedly. The idea of SSC, a Spec class in Solo, was very intriguing to me, as I wanted to try to rule out “I don’t have the right car”, from the equation.

The weekend started out with me leaving St. Louis just after 1pm due to a company all hands meeting. I ended up getting down to Arkansas Aeroplex in Blytheville just after 5pm on Friday evening. I parked the car and met up with my co-driver for the weekend, Kevin Dietz out of Washington state. We discussed if there was a chance to do practice starts, or take a shot at the practice course. The practice starts were wrapping up, so I quickly unloaded the car and headed over. We ended up taking 7 practice runs between the two of us, and found the car to be rather pushy.

At this point we debated what to do to try to correct for the pushiness. Kevin thought that we needed to try to fix it with alignment as we had already taken out all the front shock (set them at full soft). In my packing haste on Thursday evening I realized I forgot to pack my toe plates and camber gauge. Matt Hodges had set however, so we were covered there if we did decide to change the alignment. After much debate we decided that we wouldn’t change anything until after morning runs on Saturday. We went through tech, at which point I said hello to the other driver of the car for the weekend, Lori Gill out of Topeka Kansas.

We got a few course walks in before sunset and then I headed off to Wal-Mart for the supplies I needed for a weekend of autocross, sunscreen, sandwich meats, drinks, ice and even a new cooler. Saturday morning started out with breakfast at the Perkins attached to the Holiday Inn, which took WAY too darn log for a serving of biscuits and gravy, I then headed to the event site and got a few course walks in on each side.  From there it was time to finish the final prep on the car, which included getting a few more of the required decals mounted.

Lori was the first driver up for the weekend, competing in L4, so I took the car over to grid to get her setup and ready for the 9am start time. Lori headed out and ran in L4 having a good showing for her first time in the car. When SSC was up in Group 3, I went out as first driver and had a red light on my left side runs. On the right side course I ended up with a cone on each run. That put myself in I believe 12th place out of 13 for the class. Even with that poor placement, I was pretty happy. I had fun driving the car, and without the cones and red lights, I was sure that I could hold my own in the car in the class if I cleaned things up.

Kevin went out with the second driver pairings, and performed very well. He ended up sitting in the lead in SSC after the Saturday morning runs, and didn’t let that lead go all weekend. After the morning runs, and the performance of the car we decided that we didn’t need to make changes to the alignment and would run it as is.

Being the leader, Kevin was now gridded at the front of the class, and went out on his Saturday afternoon runs and improved on his times on both sides by .171. Me, being near the bottom of the pack got relegated to the second driver line, we decided to try setting the front shocks back up a little bit, so I turned them from full soft, 1/2 turn. I went out and on my first Saturday afternoon left side run and turned my two prior red lights into a coned run, but at least it was a time. On the right side I was able to clean up cones from the first two passes, and on my final run on the right side run make up more time. I managed to move up into 3rd spot, .056 back from David Lousteau, and .256 back from Kevin. Funny story, after my second left side run, I immediately headed to impound, I was stoked that I finally had a good run on the left and completely forgot that I needed to run one more run on the right. Lucky for me I was able to get back in line and get the right side run completed.

Sunday morning Kevin and I both went out with the goal of improving things considerable. I was honestly hoping to catch him, and he was hoping to put down quick runs on his first runs to try and increase his lead on the class. He succeeded, I did not. Kevin managed to put his fastest times down for the weekend on his final run on each side. I managed to do my fastest on Sunday morning as well, but not near as fast as I think I could have been. Ultimately I finished in third place, a trophy spot, and Kevin took the win in the SSC class.

Towards the end of the day I was sitting in 44th qualifying position for the Super Challenge, the 32 car bracket competition at the end of the ProSolo event. I put my name into the drawing to get into the 8 car bonus challenge, but with all of the people who ended up dropping out of the Super Challenge bracket I ended up getting in as the 32nd seed. Kevin got in as the 6th seed I believe. 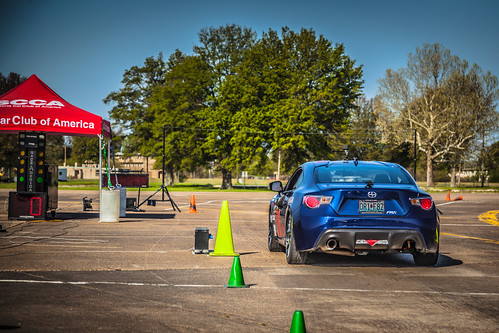 With the bracket competition, each car lines up and runs their Class’ dial in time, which for me, meant in order to be fast, I needed to run Kevin’s fastest time for the right side, and left side. To account for this, each car that lines up in the bracket has a unique pattern to the lights at the starting line. For a slower car, such as SSC, that means we would typically leave BEFORE the car we are lined up against, with the idea being that if we both ran perfect times we would cross the finish line at exactly the same time. My first time in the Super Challenge was not uneventful. I went out on the right side course, lined up against the #1 see, David Whitner. The right side course was slightly slower all weekend compared to the left side course, so when I came back, with an 8/10ths of a second difference from David I was pretty happy, knowing that I could probably make up that difference on the left side.

When David and I lined up on the 2nd runs, I was on the left. The “christmas tree”, the drag strip lights that tell us when to start, started coming down, but they came down first for David, and not for me as they should. I immediately thought something was wrong, but I couldn’t risk sitting there and not taking a run, so I left when my lights eventually dropped. That run on the left side was sloppy, I was not happy with it, but I was pretty stoked when I came in from the run and was told to get right back in the lane for the left side and to take another run. They had entered the dial in times incorrectly, so they needed us to run the course again. On my second time around the left course, the car felt MUCH better. Problem is, I picked up a cone early on in the process. I still pushed to get the car back across the finish with a decent time, but I couldn’t make up the deficit of the cone and I was bumped from my first Super Challenge attempt in the first round.

Kevin ended up in the 2nd to last pairing out of the round of 32, lined up and defeated Chris Edens in an S2 Miata. The next round Kevin lined up against Russell Blume in his HS Mini Cooper and took him down as well. The third round was SSC #1 and #2 with David Lousteau lining up against Kevin. Again Kevin drove away victorious to line up against Mike King out of Florida, in his HS Ford. The final round had Kevin lined up against Jonathan Warlof in a blue Mustang. I can’t do justice with words the excitement I had of that final round, so I would encourage you to watch the video from my Facebook Live session.

Here’s the video from on top of the car of Kevin’s Super Challenge win. 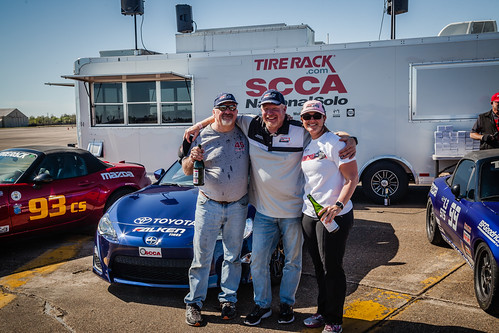