Today was the first St. Louis Region Solo event in the 2018 series, so it was the first time out in the car, and I must say, it was great (albeit cold, windy, and even snowing/sleeting/raining at times)! Natalie got to take the first runs in the car, actually the first 6! She hasn’t seriously autocrossed since 2008 when we had the Corvette, but I believe this year will be different and she’ll run quite a few local events and then we’ll see if I can’t talk her into Solo Nationals as well. Natalie managed to get down to a 51.997 on her 4th run, but trying harder on run 5 and 6 she went the other direction on the clock. We’ll see where she placed within the ladies challenge once the results are published later this week. 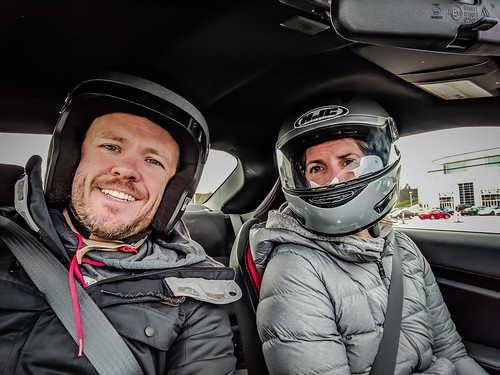 My turn to run was the third heat, which surprising started just around 1pm or maybe a little after. (The STL region really had their stuff organized for event #1, definitely ran smoothly considering it was the first event of the year). There were 3 other drivers in SSC today in St. Louis, Michael Kopec and a gentlemen from Troy, IL who was out in his car at his first autocross! That takes some commitment, getting into autocross in a spec class right off the bat, hope to see him at more local events this year.

My first run I went out an ran a 47.477, though I plowed through 3 cones after the finish (might as well get my own cone cherry popped on my first run in the car).

My second run I went a just under a tenth of a second faster, but picked up a cone on the front portion of the course. My 3rd 4th and 5th runs ended up getting faster, each separated by a couple of hundredths. I was ultimately able to get my fastest clean time down to 46.497, .832 ahead of Kopec for the day.

Here’s a video from my fastest run.

On my 6th run the course was started to get slick due to the rain/sleet, and I ended up losing control on the back half of the course. On the way home the car felt funky, so I stopped and took the turns out of the Konis. I ended up noticing that the steering wheel was off center, and then I noticed that both the ABS and SLIP lights were on the dash. I scanned the OBD2 with my Torque app to see if there were any codes being thrown for those two lights, but wasn’t able to find anything. My internet research, and help from the SSC group on Facebook leads me to believe that the alignment (wheel being crooked) is what is causing the lights. I’ll head over to SPS this week and see what I screwed up when I spun today!

Overall I’m stoked about how much fun I had in the car today. I didn’t win PAX, but I didn’t expect to, the PAX for this class doesn’t appear to be close to a valid equalizer for 2018. I will be surprised if I get in the top 2 on PAX at all this year locally, but we’ll see, maybe I’ll be surprised.  I’m looking forward to the Misfit Toys event next weekend, and the Blytheville ProSolo the following weekend!