I have been scouring the interwebs for a good month or so looking for the perfect FR-S for my SSC build, and came across the one via Autotrader. I reached out to the dealership via Autotrader, and also via TrueCar.com to see what kind of deal I could get on the car. The asking price was $18499, via the TrueCar inquiry they immediately dropped $125 from the price, though the TrueCar quote was adjusted to include a $598 dealer documentation fee, for a total price of $18,972. 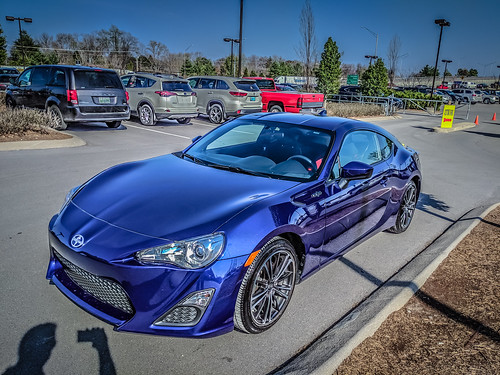 I managed to talk the dealer down about $1k from that price, and after Brian Johns from https://carpartment.wordpress.com/ stopped by the dealer to check it out for me, I placed a deposit via the phone on Friday night the 9th. Just over a week and a half ago I hitched a ride with Dave from SoloPerformance.com down to the Dixie Champ Tour in Adel, Georgia. On the way down we stopped in Murfreesboro, Tennessee at Toyota of Murfreesboro to pick up my new SSC ride, a 2016 Scion FR-S.

Because we were on our way down to the Champ Tour, and we wanted to try to swing by the Jack Daniel’s Distillery, we were sort of in a rush when we arrived at the dealer with the truck and trailer in tow. I was hoping to get and our of the dealership in under 2 hours, which, unfortunately, is impossible with car dealers. I performed a quick test drive of the car, and looked her over to see what condition it was in. Overall I was disappointed as I had been told that the car would be detailed before I arrived, but it was far from detailed. It had a rough surface, some sort of film/overspray over most of the car, (top, windows, hood) that was very rough to the touch. It wasn’t bad enough that I would change my mind on the car, I figured I would just detail it myself when I had the time and get it cleaned up.

After that, we tried to move forward with the paperwork, I had pre-approval paperwork ready to go from my bank, and even with that it took about 2.5 hours after we arrived before I was back on the road trying to catch up with Dave and his dad who headed off to Lynchburg to take a tour of the distillery.

Stay tuned for more posts here on the SpecFRS blog, and be sure to follow us on Twitter too.