This post is coming 6 months (maybe more?) too late, but at least it is coming. The 2018 ProSolo Finale and Solo National Championships was a week of ups and downs for the team. The results were mixed across the board in terms of performance with some highlights and some down times as well.

To start off the week we arrived for the ProSolo Finale on Friday, got the car off the trailer and waited for things to dry so that we could get some practice starts in on a drying start line. Everyone was waiting for dry conditions, and I wasn’t sure if that was going to happen, so I went out and took some starts to try to get a feel for the brand new Falkens that were on the car. Teddy took a couple of starts as well before the mad rush of people. The car needed some decals applied before everything got started, but overall was ready for the week of events.

Saturday morning for the ProSolo Finale came with Teddie heading out in L4. She struggled on Saturday morning with red light and cone runs, but putting her fastest left side run down for the weekend on her 2nd attempt. I also went out with Red Light and Cone issues on my first runs on each side. On the 2nd attempt on the right side I laid down my fastest run, it was about 7/10ths off the pace needed for the class for the weekend.

Saturday afternoon both Teddie and I were able to put down faster runs on the other side, but couldn’t quite make up the differences we wanted. Sunday morning it was wet and cold and barely anyone found time on the course, Teddie and myself finding none.

Teddie ended up in 3rd in L4 (ssc) for the weekend, 1 out of trophies, but close enough to get into the ladies challenge bracket on Sunday afternoon. I on the other hand ended up in 14th place, out of 18 drivers, well over 2 seconds off the pace. To say I was displeased with my performance is an understatement. I spent the next few days wondering why I was going to stay in Lincoln for the next 5 days for the Solo Nationals.

Sunday afternoon was a definite bright spot for the ProSolo Finale, Teddie ended up in the Ladies challenge and performed very well! She ended up making it to the semi final round before being knocked into the third place bracket. She ended up taking Third place to help salvage the weekend for both of us! I also headed out with my camera and shot a lot of the ProSolo challenge, having the most fun I had all weekend behind the lens of my camera. You can check out some of the photos via the gallery links over on RainbowMarks.com. 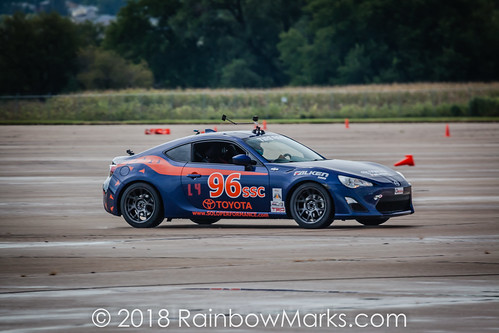